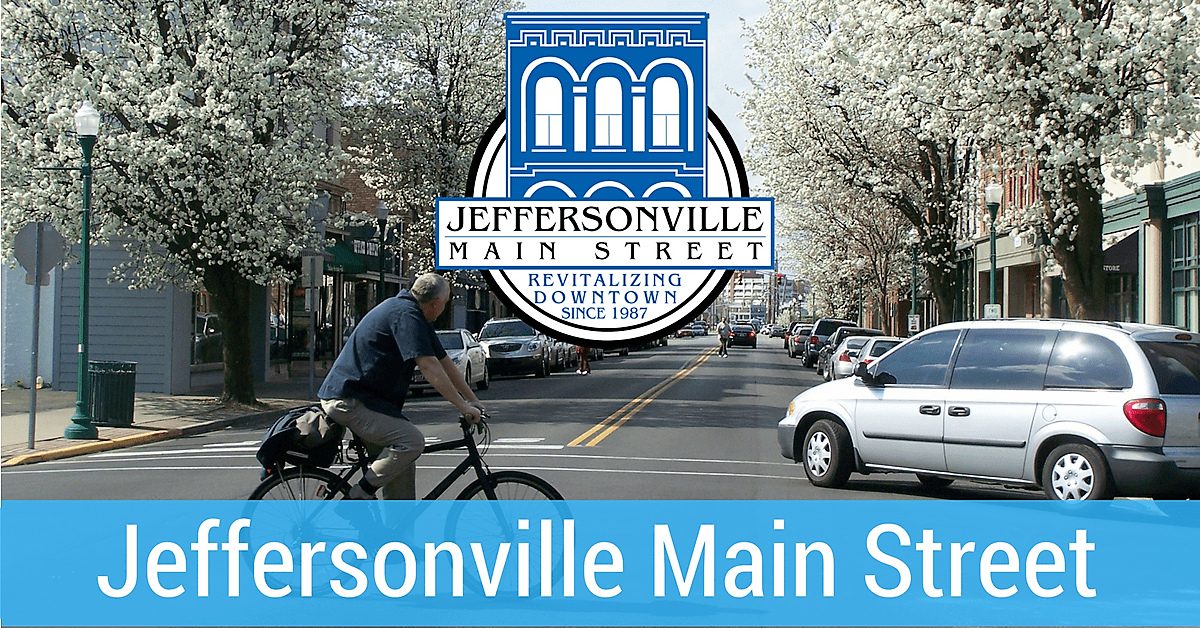 Downtown Jeffersonville, Indiana is full of historic sights and attractions, including the Big Four Bridge, Schimpff’s Confectionary, the Howard Steamboat Museum and more.

The Jeffersonville historic district was listed on the National Register of Historic Places in 1987 because of its architectural and historic significance. It includes a mix of residential and commercial architecture, much of which dates from the mid-1800s to the early 1900s.

The Big Four Bridge spans the Ohio River and connects Louisville, Kentucky to Jeffersonville, Indiana for Pedestrians and Bicyclists.

This incredible museum is a must see to get a glimpse into the history of Jeffersonville and all of Clark County.  The museum collection ranges from the era of Native Americans to the present and includes family papers, photograph collections, early maps, clothing, Edwardian toys, vehicles, artworks, and archaeological artifacts of Clark County.

The Old Jeffersonville Historic District – encompassing an area roughly bounded by I-65, Graham Street, Court Avenue and the Ohio River in downtown Jeffersonville – was listed on the National Register of Historic Places in 1987 because of its architectural and historic significance.

It includes a mix of residential and commercial architecture, much of which dates from the mid-1800s to the early 1900s. At the south end of the district, Riverside Drive includes many grand homes, and is one of the few residential streets in Indiana with homes overlooking the Ohio River.

A water park for all ages. Also includes a walking trail and skate park.

Enjoy the sights and take a walk along the Ohio River.

Enjoy this nearly seven-mile long park that stretches along the banks of the Ohio River. The improvements to this seven-mile stretch are all a part of the Ohio River Greenway. The Greenway's eastern most beginning is in the City of Jeffersonville next to Jeffboat. The Greenway Plan features a multiuse path close to the river, in fact, at some points right at the river's edge.

The existing Terraced Lawn at the foot of Spring Street in Jeffersonville has been augmented with a multiuse pathway and additional lighting. The multiuse path will be connected to a landing at the base of the Big Four Bridge and will provide direct access to Louisville as part of a cooperative plan by the cities of Louisville and Jeffersonville.

Schimpff's Confectionery is one of the oldest, continuously operated, family-owned candy businesses in the United States. It was opened in its present location in 1891 by Gustav Schimpff Sr. and Jr. This unique confectionery and lunch room in Jeffersonville's downtown historic district comes complete with a 50's soda fountain and original tin ceiling. The old-fashioned candy jars, cases, and turn-of-the century equipment transport you back to the good old days of home-made candy and a real fountain drink.

The Schimpff's Candy Museum and Candy Demonstration Area offer a glimpse into the world of historic candy making, packaging and advertising. Live candy-making demonstrations are frequently given. Tours are available and groups are asked to call in advance to schedule a FREE tour of the Candy Museum. Schimpff's has one of the few candy museums in the United States. It displays thousands of pieces of American candy memorabilia and represents decades of collecting candy equipment and artifacts.

Schimpff's is famous for its cinnamon Red Hots, hard candy fish and Modjeskas. A more recent favorite is the chocolate, caramel, and pecan confection molded into the shape of a turtle.

The Southern Indiana Visitor Center is located in a distinctive Sunny Side Yellow building with angled walls and a circular, atrium-like base. This curiosity calls to visitors to enter the building where they learn about the many activities and attractions that Southern Indiana has to offer. The design of the Visitor Center contains Indiana limestone walls in a pattern similar to the adjacent bridge building, an edge profile reflecting the two pillars at the end of the bridge and an exposed steel structure in the gallery that is a reflection of the bridge framework.

Built in 1837 by brothers David and Wilson Grisamore, this outstanding two-story brick house blends elements of both the Federal and Greek Revival styles. It has housed several notable Jeffersonville families, and William Henry Harrison delivered a speech from the front porch during his 1840 presidential campaign. Seriously damaged by fire in 1981, the house was rescued and restored. The building was listed on the National Register of Historic Places in 1983.

The Vintage Fire Museum and Safety Education Center is open for group tours for students and youth organizations.

This park is a beautfiul focal point in historic downtown Jeffersonville. It is home to the annual Concerts in the Park series that emanates from the gazebo in the center of the park. A major architectural feature in the park is the Carnegie Library, a neoclassical structure with a magnificent bronze dome. Built in 1903 with funds from Andrew Carnegie, it was designed by Jeffersonville architect Arthur Loomis, who had been a partner in the Louisville firm of Clarke & Loomis. Immediately to the west is the former Post Office Building. Erected shortly after the Carnegie library, this structure is also an excellent example of the neoclassical style. It has been renovated for medical offices. Later additions to Warder Park include a statue of President Thomas Jefferson, for whom the city was named and the Timeline of History wall.

At the Corner of Court Avenue and Spring Street.